The Horns Of Nimon

Posted in Other Writing

Graham Duff’s reassessment of BBC TV’s final Doctor Who story of the 1970’s, the largely unloved THE HORNS OF NIMON.

The one thing The Horns of Nimon doesn’t lack, is self confidence. The script has a cheeky, last day of school tone, with former script editor Anthony Read shamelessly employing such sci-fi starter-pack lines as “After them, you fools!”, “Take me to your leader” and “You are all doomed! Doomed!!”

Things quickly become giddily self reflexive, with the Doctor reffering to his “running around the universe saving planets.” He and Romana now possess His ‘n’ Hers sonic screwdrivers, K9 has developed the ability to clear his throat and it’s the TARDIS console which wears the Doctor’s broad brimmed hat. Unfortunately this overconfident fondling of the show’s iconography only serves to nudge us outside of the drama.

Quite how a once-powerful empire like Skonnos could be so savagely reduced to what appears to be the set of The Cliff Richard Show is unclear. As depictions of alien worlds go, Skonnos looks as if, at any moment The Dr Who Dancers might skip into view. Then there’s the Nimons – creatures who talk eloquently enough in company, yet elect to growl gruffly to themselves whilst walking alone down corridors.

And what about Graham Crowden’s Soldeed? A performance so big, scientists say it can be seen from the moon. Yet Crowden was a superb character actor who’s filmography consists almost entirely of must-sees and fascinating cult items. For proof of Crowden’s true prowess, check out his portrayal of a wide range of characters in Lindsay Anderson’s peerless satirical trilogy If…., O Lucky Man! and Britannia Hospital. Let us not forget that Crowden had been considered for the role of the Doctor when Jon Pertwee finally hung up his opera cloak. It’s intriguing to imagine a parallel world where Crowden plays the Doctor, Tom Baker turns in a portrayal of Soldeed which is no less nutty and The Dr Who Dancers get their own spin-off series.

However, despite its superficial silliness, here is a story with a very dark heart indeed. A tale in which a group of children are to be sacrificied to a being who “feeds by ingesting the binding energy of organic compounds – such as flesh.” There are several moments of lucid morbidity. Like the look of abject horror on Soldeed’s face when he discovers there’s more than one Nimon, or the corpse which collapses into dust at Romana’s touch. 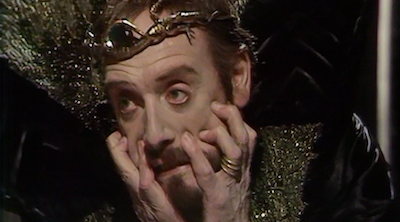 The scenes set on the dying planet of Crinoth have a strange chill all their own, thanks to a subtle performance from John Bailey, atmospheric lighting from Nigel Wright and yet another perfectly realised score from Dudley Simpson.

Which brings us to the biggest sacrifice of all. For The Horns of Nimon is the moment when Doctor Who exits the 1970s. Simpson’s controlled and dramatic scoring, Bernard Lodge’s gloriously psychedelic title sequence and Delia Derbyshire’s flawless arrangement of the theme tune – three elements which had contributed immeasurably to the show’s unique aura of mystery – all make their final apperances here.

And so, as the last scene plays out in a symbolically disassembled TARDIS, Tom and Lalla celebrate the dawn of the glossy, glitzy 1980s by getting out the disco rope lighting. Now, where are The Dr Who Dancers when you really need them?