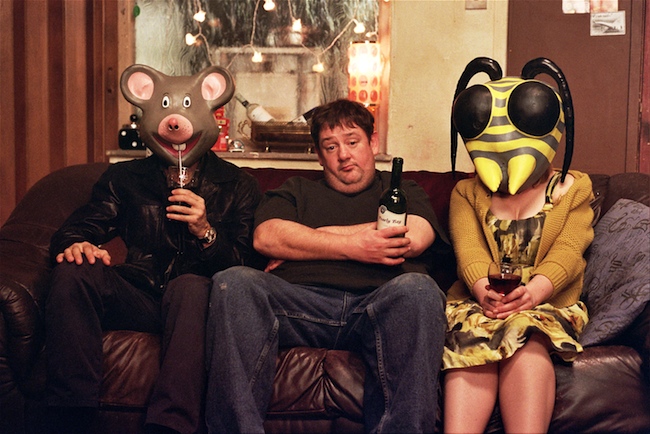 This dark comic soap opera centres around Moz (Johnny Vegas), a lazy and unambitious Manchester hash dealer.  Moz deals from home to a circle of twenty odd customers. And some of them are very odd indeed.

There’s Colin the obsessive compulsive petty thief and Jenny the child minder from hell, not to mention Cartoon Head – a low rent hit man who’s never seen without his mouse mask. And Graham Duff himself as the camp and bitchy Brian.

The action never leaves Moz’s flat, and what at first appears to be a tale of everyday stoner folk, soon reveals itself to be an hilarious psycho-drama involving murder, multiple affairs, kidnapping, severed hands and some very strange hallucinations…

“The best British comedy show on TV.” – The Guardian.

“Ideal makes for very funny viewing with a slightly sinister edge. It has just about everything – a great script, great characters and actors – and Johnny Vegas at his best.” – The Observer

“This is pure pleasure – an unadulterated joy from start to finish.” – The Mail on Sunday